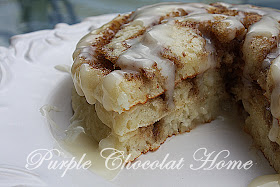 I saw a picture of this on Pinterest and
I was drooling. 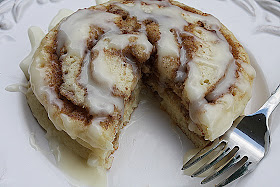 Ok, some of you know about Pinterest and
many of you asked about it.

Pinterest is a "way to catalogue the things
you love" as they say on Pinterest.com.
I would describe it as a place to create your
own personal bulletin board collages from
internet images.

To begin, visit Pinterest.com and request an invite.

They may take a while to get back to you, but
they will eventually send you an email and
have you set up an account and choose a password.

Next you create a "board" or a collection of
interest, for example, I created a food board that
I titled "Food As Art".  Then I began "pinning" or
clicking on beautiful photos I saw and Pinterest
automatically catalogues those photos on my
"Food As Art" board.  I can create as many different
boards as I want.  I just saw one tonight that had
a different board for every color and it was just a
collection of inspiring photos in that color.

When you click on someone's board then you
can be redirected back to the original source, so
for instance on the Pinterest picture of the
Cinnamon Roll Pancake, when I clicked on it,
I found the original post at
Recipe Girl.com so I could make the recipe.

Next you can follow friends and they can follow
you and then all of their picks show up on your
main Pinterest page.  You can "repin" their picks
or pins and add them to your boards or just enjoy
them on your main board.

First let me say, that Pinterest will up your
drooling on your computer, so if that is
a danger to your equipment, don't even get started!
You will be drooling over food, fashion, places, spaces,
quotes, etc. 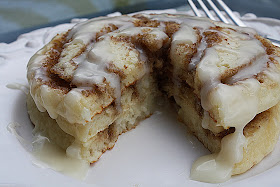 Now, back to these fabulous Cinnamon Roll Pancakes.

Recipe Girl stacked them 3 high and I just had to
follow suit for the photos, but they are so rich and
delicious you are going to be really lucky to
eat more than one. 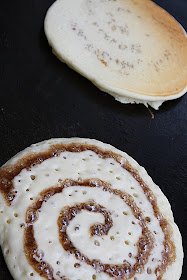 You basically make a fluffy pancake and
then swirl in a butter, brown sugar and
cinnamon mixture.  When you flip it over
the cinnamon sugar melts and creates
as she describes,  "craters of crusty, sugary cinnamon."
Then, just to make it complete, you top it with a cream
cheese glaze!  Oh, it is even better than it looks.

Mix the dry ingredients in one bowl and the wet
ingredients in another bowl.  Stir them together
until everything is moistened leaving a few lumps.

Mix the three ingredients together.  Place
in a disposable piping bag and snip the end
off or put in a Ziploc bag and snip the corner off.
(This will keep in the fridge so you can make them again
and again and again!)

Heat your griddle to 325 degrees.  You don't want
these too cook too quickly.  Make desired size
pancake on greased griddle and then using the
piping bag and starting at the center of the
pancake, create a cinnamon swirl.  Wait until
the pancake has lots of bubble before you try
to turn it.  Yo will find that when you turn it
the cinnamon swirl will melt.  If you have your
griddle too hot, it will burn the cinnamon, so I
suggest 325.

The cinnamon kind of melts out
and creates the craters which then fill perfectly
with the cream cheese glaze.

In a microwave safe bowl melt the
butter and cream cheese and then stir
together.  Whisk in the powdered sugar and
vanilla.  Add a little milk if needed to make
it a glaze consistency. 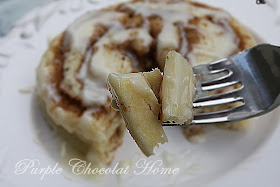 This was the feature on our Sunday Brunch
last week.

Your comments are the highlight of my day! Leave a comment and then I can come and visit your blog. Have a wonderful day! Unfortunately I have had to block anonymous comments, hope you understand.